The residents of this retirement home spend their days relaxing on a picnic table or in a sunroom with the other residents. If they get bored, they can take a walk across a suspension bridge and watch a ferret scurrying forward and backward through a transparent tunnel above their heads.

They can visit the birds in the aviary, but they aren't allowed to touch them. Because they would eat them. You see, these retirement home residents are cats. Twenty perfectly healthy and wonderful old (over the age of 10) cats that no one wants. No one except Bruce and Terry Jenkins.

They are the owners of Cats Cradle, a senior cat rescue and sanctuary on the 1acre grounds of their sprawling 1927 farmhouse in Lutz.

There is no doubt Bruce and Terry Jenkins are animal lovers. Over the years, the couple, both a very young 70, have bred golden retrievers and Himalayan cats. They have raised Shih Tzus and rehabbed a Tampa Bay Downs racehorse.

They raised geese that now live in the big retention pond in front of George M. Steinbrenner Field in Tampa. They had a zebu, which is a not so miniature a humped South Asian cow, named Willard. They had a pony named Moonbeam for their daughter. They even took in a friend's 100pound

potbellied pig after it grew beyond its expected 35pound size. (Not surprising, Terry said. "A hungry pig is a mean pig.")

Today, the couple share their home and their lives with seven dogs — a Bouvier des Flandres named Tulip, two Russian wolfhounds, a golden retriever and three Italian greyhounds — that sleep on their beds but aren't allowed in the living or family rooms; two indoor Persian cats; a panda ferret named Cooper; two very loud geese, Sebastian and Sabrina, which snap at Lola the goat through a fence; a miniature horse named Shortcake; a cockatiel, five parakeets, a parrotlet and four hens who lay four brown eggs a day.

And, the animals they just might love the most because they are the ones most in need of loving: the 20 elderly feline residents of Cats Cradle.

In 2008, Bruce Jenkins was at All Creatures Animal Hospital in Lutz to pick up medicine for an ailing dog — one of four they had — when he inquired if there were any kittens in need of rescue. A woman standing nearby overheard. She had a cat for him. Not quite the kitten he was looking for but a great cat nonetheless. It was her father's 18 year old cat.

She told Bruce that she took in the cat after her father died but could no longer keep her. She said the cat would have to be euthanized if she couldn't find her a home.

Bruce peered into the cat carrier and what he saw was a sweet, beautiful calico staring back at him. Her name was Patches and she stole his heart.

"I brought her home and she lived with us for two more years until her death," he said. About a year after Patches came to live with them, the couple took in two more old cats. Bumper was 10 and Splatter was 12 when their owner moved into a home with two dogs. The cats didn't like it at all, but who would want two old cats? Yep, Bruce and Terry Jenkins would.

Not long after that, well, long enough for them to take in old, deaf Bumble and his companion, Forrest, who were left behind when neighbors moved, Bruce and Terry were flipping through a dog magazine in Barnes and Noble. There was a story about a kind man who took in unwanted dogs.

They decided they would take in old cats like the ones they had come to love, cats considered un-adoptable because of their age.

"These are not street cats," Terry said. "These are cats who have lived a life with certain expectations. "We can't duplicate the loving homes they've had, but we can make a place that gets their mind off of it." So, they went to work.

There's a schoolhouse and a water tower. There's a downtown street with a jail, a general store, a theater, a bank and a post office. There's a locomotive made on the base of an old riding lawn mower and a depot to park it in.

It's called Frontierland. It's a miniature town Bruce had built for their children, Nikki, who is now 30, and Casey, who is 27, when they were little. But, Frontierland had become a ghost town. Signs had fallen down; tree limbs had damaged buildings; floors were deteriorating.

"The once charming setting had become tired and without purpose," Terry said. She had wanted it torn down if it couldn't be fixed and used. Now it had a purpose and just the person to convert Frontierland from a kids' to a cats' playland: Bruce, the original builder. While he certainly has acquired many skills over a lifetime of building things, raising children, working in IT for IBM and selling commercial real estate, it's almost as if Bruce harnessed his inner cat to come up with the vision for Cat Town.

"To maintain cats, you have to have a great environment," he said. He built suspension bridges, enclosed with mesh fencing, that allow the cats to walk from perch to perch. There is a transparent tunnel above the bridge for Cooper the ferret. "When I designed the ferret cage, I always thought there would be a tunnel across the bridge to amuse the cats," Bruce said.

The depot housing the lawn mower/locomotive has been converted to a caged aviary with an observation platform for the cats.

What had once been a theater with a stage and seating stands was converted into a giant cat gym.

There are places for the cats to be alone or play together. There are indoor and outdoor spaces. They can be active or they can nap. Everything a cat could want. "We had a unique opportunity with this property to not house them in an institutional environment," Bruce said. The four-pawed residents Terry Jenkins sits down at a picnic table between the general store and the schoolhouse in which a computer screen monitoring eight surveillance cameras sits next to a tabletop radio with knobs that had been used to tune in a news station.

Immediately, four cats are on or around her, including one so skinny you can see his bones through his worn fur. "That's Tucker. He's so old that every day you are glad to see him," Terry said, giving him a head scratch. Every cat has a story. There's the Bengal named Prowler whose personality transformed once he got away from the two big dogs he lived with.

There's Babette, the seal point Himalayan, whose owner went into a tiny assisted living apartment.
Many of the cats come from veterinarians or shelters who are trying to save older cats that are scheduled to be euthanized. They call the Jenkins and Bruce goes to check them out.

Regardless of where they come from, all cats have to be deemed "manageable." That involves seeing — and handling — the candidates in person. "We don't expect them to be friendly but they can't be hostile," Bruce said. "We want all the cats to have a decent world," Terry said.

Right now, Cats Cradle is uncrowded by design. "If we are going to take in more cats, we need money to expand to give everybody a place to be," said Bruce, who, by his own admission, is the main instigator of the Jenkins menagerie.

They get donations of food — it costs $500 to $600 a month to feed all the cats — and money — one donation paid for a new roof — from some of the resident cats' former owners.

They also have a Lifetime Care Program in which people can arrange payment to have their cats cared for after they die. They get a tax break by being a 501(c)(3) nonprofit.

However, when it comes to getting donations of food or litter from warehouse or grocery stores, they find themselves losing out to traditional shelters.  "They don't understand this model," Bruce said. It's not for short stay cats. Although the Jenkins have a companion pet placement program, only a few cats have left the shelter. Most are there for the rest of their lives.

Terry's life as a caretaker of senior cats is very different from the life she had for 45 years in the insurance business, most recently as risk manager and plan administrator for the New York Yankees in Tampa.

"From bats to cats," her husband said, sneaking a smile at his wife. It feels good to finally be able to do all the things she wanted to do, including spending four hours a day taking care of the grounds and providing a lap and affection for the cats.

"Despite their advanced years and adjustments required of them, all of these cats were loving and accepting of us and their new home. This was our inspiration to channel our love and enjoyment of animals — into the care of these older, deserving cats in crisis," Terry said.

The Jenkins are as realistic about themselves as they are about the older cats they love so much.

"We have discussed and considered the continuation of Cats Cradle as part of our estate planning and feel confident that there are sufficient resources to maintain our facility if we found ourselves unable — or unavailable — to do so," Terry said.

Click on the Play arrow below to hear a recent radio interview with us. 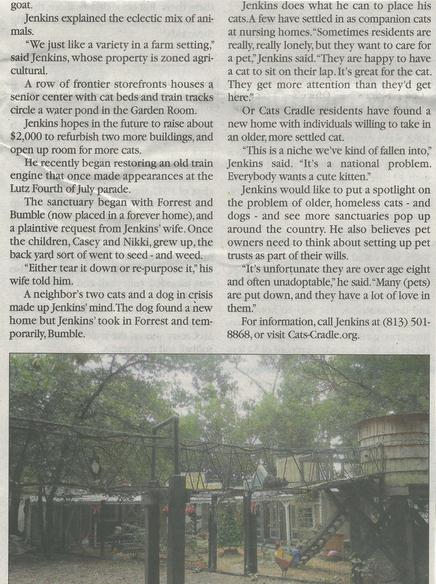 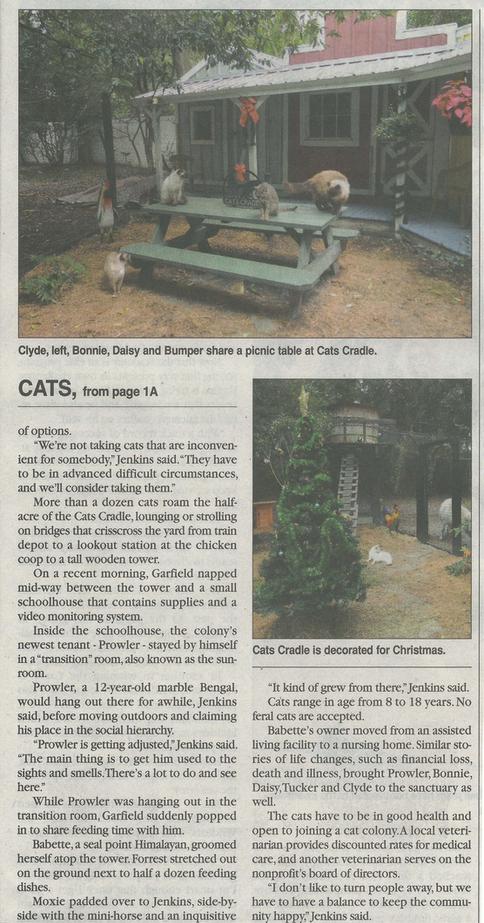 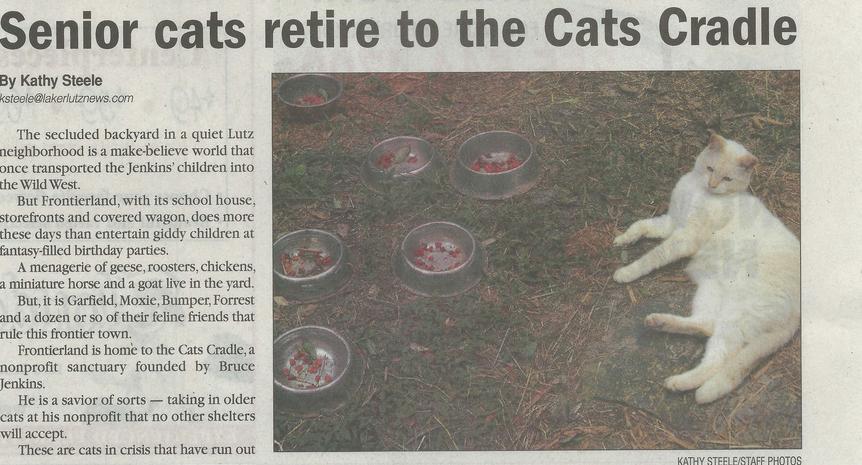 What the Press is Saying